Greetings to all my visitors - I always appreciate it when I see you have called.


When I started this card for the Midnight Madness Challenge #76 I had in mind a very feminine card, following this option..... 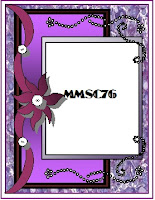 but ended up with a very clean cut masculine card instead.  I don't really know what happened - it seemed to develop a mind of it's own.
I was using the dragonfly image from PriscillaStyles Store and printed it twice, cutting out just the wings from the second image.  The image was coloured with chalks and then I layered Dimensional Glue over all of the image(s) to give some sheen and depth to them, and mounted the second set of wings over the uncut image, which had been cut out using a Nestabilies Labels 14 die. 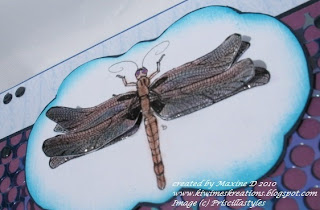 The edges were sponged with an aqua ink, and then mounted on another die cut of navy blue card which had been trimmed really close to the edge.
This was mounted onto a panel that had been layered with a punched metallic sheet  (the 'waste' from sequin manufacture).  I then used my faux nail-heads to add the detail on each corner of that panel and the edges of the card. 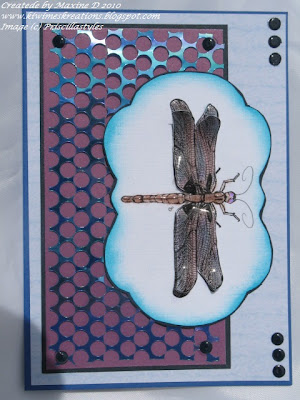 The dp on the base of the card is a pale blue with some stripes on it (unfortunately the strong light I photographed in 'washed out' this detail) - they are feathered stripes and give an illusion/suggestion of water - most appropriate as we often see dragonflies over water here.
I am linking this card to:
Midnight Madness Sketch Challenge #76
Tuesday Throwdown challenge #22 - Anything Goes
Pear Tree Designs #22- Free For All
Craftalicious Challenge # 10 - Anything Goes
One Stitch At A Time #35 - Embellish it
Thank you for calling, and commenting - your comments are treasured
May you day be blessed
Posted by kiwimeskreations at 12:02 PM

This is fabulous! Crisp, clean and gorgeous. You worked wonders with the dragonfly! I just love what you did with this week's sketch.

Maxine this is perfect for a man's card! Funny how our creations develope a mind of their own during the process. Whatever caused it, it turned out spectacular, love it!!

Gorgeous, Maxine. I love this "priscillastyles" dragonfly and what you have done with it. I think it could just fly off the card! Awesome job with the sketch challenge!
Thank you so much for playing along with the Midnight Madness Sketch Challenge.
Denise
MMSC Design Team

Very lovely card. Thanks for playing at OSAAT. Hugs, Nataliya.

Wow, the dragonfly looks awesome, you did a great job Maxine. Thanks for joining us at OSAAT.

Love your cards! <3 You are very talented!

Maxine,
You made a perfect manly card! I always say "go with the flow"! I start a lot of cards with one thought in mind but sometimes "they" just have a mind of their own.
Hugs,
Marsha

WoW!!! It's a Gorgeous card. LOve it. Thank you soooo much for joining us at OSAAT.
Chrissyxx

Maxine this is just spectacular. I love what you did with the "priscillastyles" dragonfly. You really know how to create a beautiful card. Great job with the sketch. Thank you so much for playing along with the Midnight Madness Sketch Challenge.

I love the dragonfly, it really jumps off the card.
Thankyou for sharing with us at OSAAT for our embellish it challenge. Good Luck !

Hi Maxine!
Your Dragonflycard is amazing! Love the icyblue distressing and the metal is sooo cool! It has some kind of hard industrial feel meeting this fragile dragonfly. FABOLOUS!

Thanks for joining Midnight Madness Challenge. Your support is highly valued, and we hope to see you playing with us again real soon ;o)

Great card and a beautiful image!
Thanks for joining in with our “Embellish it” challenge at OSAAT.

Thanks for joining the 'free for all' @ PTD this week. Good Luck! x

Wow quite an unusual card, love the effect on the dragonfly's wings! Thanks for joining us at Pear Tree Designs this week and good luck x

Maxine, this is just beautiful! I love what you've created with Priscilla's dragonfly! The metallic sheet compliments the image so well, great job on reusing!! Beautiful sparkle and nice addition of the faux nail heads! Thanks for playing along with us again this week.
Hugs,
Charlotte
MMSC DT

This is an awesome card! I love what you did with the metal sheet. Thanks for joining us at Tuesday Throwdown.