Having made several cards that have gone together very quickly and according to plan recently, I was a bit miffed this afternoon when I went to make a card, lost my mojo, was inspired by a card on the back of a stamp packet (made by Nina Brackett of Crafting In Croatia), and then struggled to make it!! 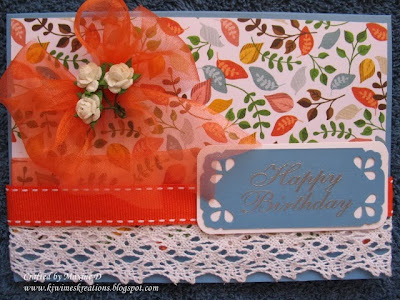 I started with the paper from an Amy Tangerine pack called Ready Set Go., found the blue card that matched, the lace I wanted to use, and then tried to make the sentiment panel.... 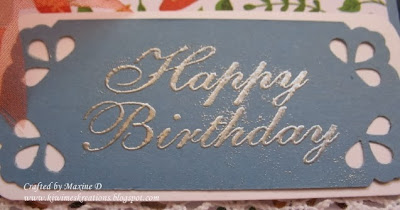 Over an hour and at least seven attempts later I eventually settled for this - I stamped, silver embossed, and then trimmed and punched the corners of the blue panel, and mounted it on white and rounded those corners too. 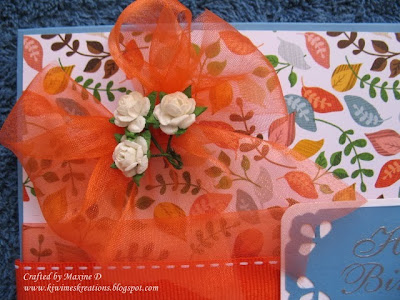 The organza ribbon had frayed along one edge so it needed to be tidied up before I made the bow - thankfully the bow behaved itself and worked properly on my first attempt!!  The wee white roses are some I bought some time ago and I have no idea of the brand - I twisted the stems together and formed a hook which I tucked under the bow. 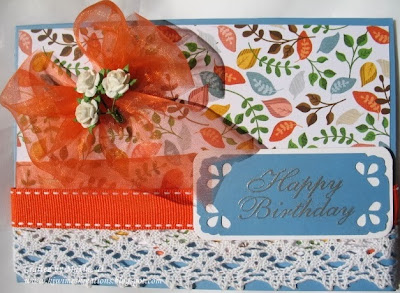 I had die cut the edge of the paper and initially was going to layer that over the lace, but ended up tucking it under the top of the lace, where it gives a wee touch of colour.

I actually like the card now, but this afternoon  it was a different story!! 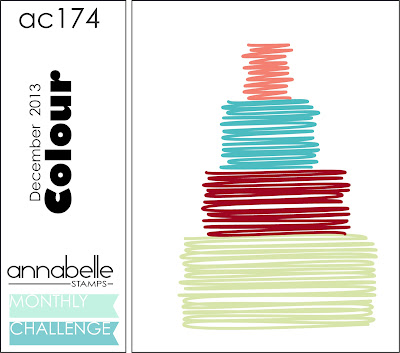 Thank you for visiting - any comments you leave are deeply appreciated
May your day be blessed.

Posted by kiwimeskreations at 8:31 PM

Pretty paper , lush bow and fabulous lace for this stunning card . Thanks for sharing on Card Crafters Circle

This looks lovely Maxine - sometimes it pays to persevere and this is one of those times. Love the colours and that gorgeous bow! {{{hugs}}}

Well you persevered and I think it is a beautiful card. It is lovely cheery colours and makes a difference from all the blues, reds and greens of Christmas cards, currently flooding our blogs.
Kate x

It doesn't look like you struggled with anything on this card Maxine! It's gorgeous! Love the design you used and that big red bow is beautiful!
Lynn

Maxine,
For me the piece de resistance is the beautiful lace. next is the flourishing bow with the rose centres. All the rest is just pieces in a beautiful puzzle. I really like it. Blessings Carole

Hi Maxine! This is such a Lovely card!! I love the colours, the pretty little flowers and the embossed sentiment. It turned out great!! Hope you are keeping well, and have a lovely week ahead. Take care!

Such a bright and cheery card for our theme this week, thanks so much for sharing with us at Allsorts challenge.

Beautifully done- love the DP and the wonderful bow!!!

thank you for showing us your lovely ribbon card over at Sweet stampin'. Debbiex

Beautiful.
Love the lace and the pretty big bow
Thank you for joining us at Creative Fingers

Very pretty...I can relate how you con sometimes struggle and struggle to get a card right...but all your effort was definitely worth it!

Such a pretty card, love the colour combo and gorgeous ribbon, thanks for joining us at A Gem of a Challenge xx

I'm still going with that lace altho you did get that organza to cooperate. Thank you for entering your wonderful paper art project with us at Word Art Wednesday.
Blessings,
Carole Robb Bisson

Such a gorgeous Birthday card. Love the bow and the cute flowers you attached to it. Thanks for blessing us with your artwork this week at Word Art Wednesday. Leaving you with God's Word in Proverbs 18:10 which says, "The name of the LORD is a strong tower; the righteous run to it and are safe." God bless, always!

Beautiful card, I love the lace.
Thank you for your entry at Scrapping4funChallenges.
Rachelle DT
http://scrapping4funchallenges.blogspot.com

Pretty card - perfect for our challenge this week. Thank you for sharing and joining in with the fun at Sweet Stampin’ this week and good luck. Hugs Janine xx