This card was a lesson in how to mess up and cover up! 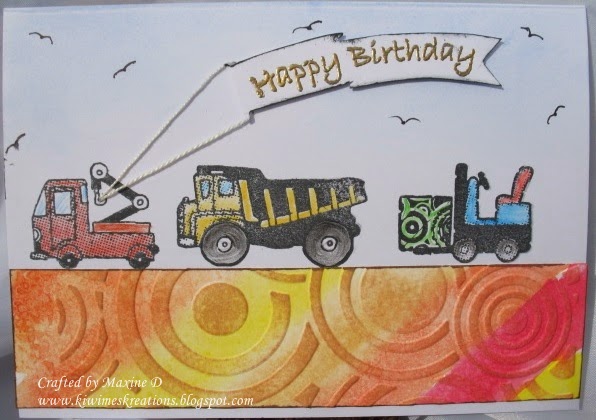 I started with the truck images running along the 'road', and that did not go as smoothly as I had hoped, but the end result was acceptable, on the second try!

Then I had the bright idea to have the sentiment on a banner flying from the tow truck - I had to fussy cut it, and then I decided to sponge the edges to add definition - oops, smudge!  Ah well, the young recipient will have to think it is shadow.

I left one end wider than the rest of the banner and folded it back to hide the thread, then used a needle to take the thread to the back of the layer at the hook of the tow truck.  The banner was mounted with foam dots to add dimension.

The 'road' was made from a panel of sponged, sprayed, embossed and sponged again card that I had on my desk - I thought it gave the rugged impression of a construction site.

I rubbed some chalk into the card to create a pale blue sky, but then there was the pesky matter of a couple of tiny blots of black ink on the background - then inspiration struck - birds!!  I used the splats as bodies and curved a couple of wings either side - now that was a very acceptable solution!

Posted by kiwimeskreations at 5:37 PM

this is cute, thanks for joining us at Crafty Sentiments this week and good luck, Shazza

Maxine, one of the very first things I thought were just so cute on this card was the birds!!!!!! Little did I know they were covering up something - but they're just perfect on here. Love the way you did the "road" too!! Very creative. The entire card is wonderful!!!
Lynn

Well Maxine, who knew until you told? This is such a fun card for a little boy. Great cover up. Thank you for sharing your wonderful art with us this week at Word Art Wednesday. Blessings, Carole

What an awesome card, Maxine! I love how textured it is.

Very creative Maxine. Love your cover ups. All I can say is me too. Love your trucks and road. The banner is great.

Love this it all looks fabulous, thanks for joining us at Crafty Sentiments this week. Jac x

Sounds like you were having fun creating this fabulously fun card Max. :)

This came out great, Maxine! Super fun! I like how it almost resembles a comic book look :) It looks like the banner was totally planned to me - perfect!!

What an awesome card- loving the road and the texture and colors- and the birds are a brilliant idea!

Awesome masculine/kid card, Maxine! My son would love it, too. Thanks so much for playing along with the Simon Says Stamp Wednesday Challenge: Anything Goes!

What a delightful card, Maxine!! The first thing that caught my eye were the birds. Then I find out that they were a last-minute adaptation. Brilliant!!! The banner is very impressive as well.

What a cute little scene and I love how you made the banner 'fly'! As far as the 'smudge' goes, I would not have noticed that and really, it still doesn't look like a smudge to me.
hahahahha... the cover up birds is so cute.. I always say we don't make mistakes, we create opportunities!

Great Guy Card! This is Wonderful!
Thank you for sharing your work with TTCRD this week.

I am sure Michael will LOVE this card, it's right up his 'road'!!!! Hahaha!

Fabulous male card, what delightful truck images.. Thanks for joining us at Lexi’s Creations.

Awesome boy card!! Love the "road", so colorful with great texture. Thanks for showing us how we can cover up some "oops" and turn it into a fab result.