This card was made for a commission by a friend.  One of the things she mentioned when requesting the card was that the recipient loves blue, so I started at that point.  I was also inspired by the current sketch at Stamplorations 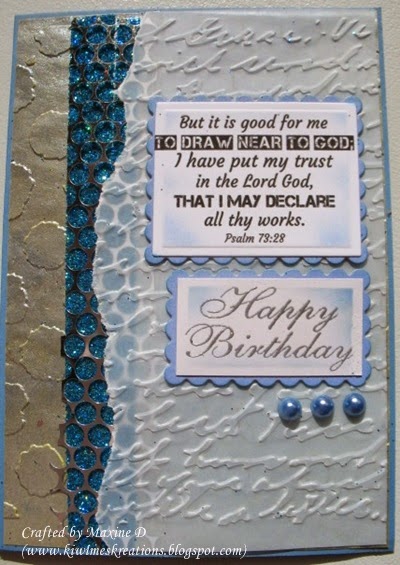 I started with a piece of paper that has spent a couple of years at least in the bottom of my 'spray box', and as I had until recently only a lemon, blue and silver glimmer sprays, it has a very deep sheen on it of these colours - I cut the paper to use a section of the mostly blue area, but it looks more silver in the photos.  I ran it through an embossing folder called Grunge Dots. 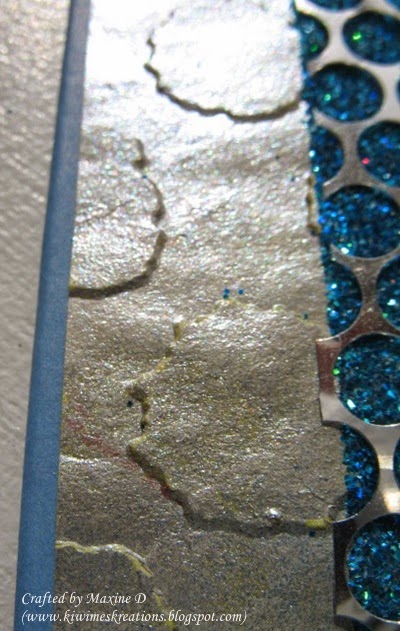 I then lined up two pieces of double sided tape, removed the backing and applied blue glitter on it.  I used some metallic waste to layer over that again 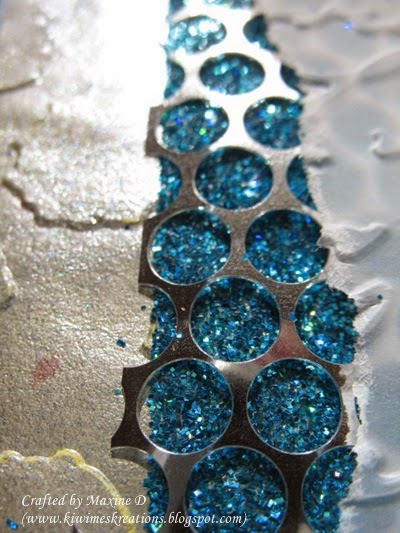 Next came the vellum, which is a pale blue, and embossed in a script folder. 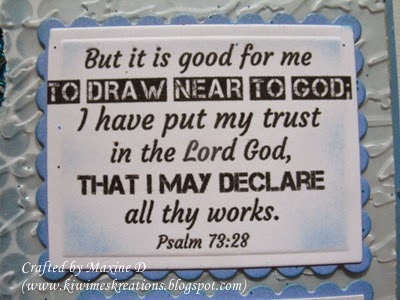 The scripture is one from Word Art Wednesday, which I die cut, embossed and sponged, then layered over a scalloped rectangle. 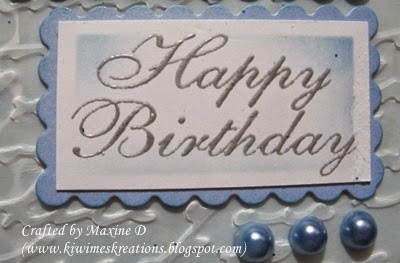 The sentiment was silver embossed, then I cut it to a rectangle, put masking tape around the edge and sponged it, before using the scalloped die 'creatively' to be able to match the other panel.
The finishing touch were the three flat back pearls.

My sincere thanks once again for visiting my blog.
Any comments you may leave are deeply appreciated.
May your day be blessed
Posted by kiwimeskreations at 5:54 PM

This is one fabulous Birthday card. Love the design and glitter.

{The Journey is the Start – my personal blog}

So beautiful Maxine. Love that gorgeous blue. Thank you so much for sharing your lovely creation with us at Creative Card Crew.
Hugs
Cathy DT Member
xxxx

Beautiful card...like how you added all that texture!

That scripture is so pretty and your card is beautiful! Love the shine on the glitter too. Beautiful!
Lynn

Love all your shapes and textures.

Thanks for entering Craft Your Passion Challenges.

A beautiful card with a special sentiment and lovely papers. Thank you for sharing this with us over at Crafting from the Heart. Sue x

So so pretty!! Thanks for playing along in the STAMPlorations Sketch Challenge!!!

Loving all of the shimmer- and the scripture is awesome! Beautifully done.

What a fabulous creation! Thanks for playing along with us at Creative Card Crew!

A gorgeous card Maxine. I love the embossed words and lots of wonderful details!

Lovely card. Thanks for sharing with us at the Incy Wincy challenge. Barb

Gorgeous card, Maxine! Love the scripture.
I am your newest follower and a fellow sister in Christ. :)

Fab card! Thanks for joining us at CYP! HUgsxx

Gorgeous! I love all of the textures and the verse. Thank you for sharing your talent this week at TTCRD and please come and play again next week.

Wow, this looks amazing. I'm sure the recipient loved it. Love the bit of metallic bling over the strip of glitter. So glad you shared this with us for the Sparkle N Sprinkle Creative Challenge.

Maxine, Well DONE! Love all the pretty colors on this one, and all the textures. Am really liking the effect of the metallic waste against the embossing & the pretty vellum. Love the torn paper look, and the verse was so appropriate. Liked the way you handed the word art with the die cuts, emboss & distressing. I'm sure your requestor loved it, as did whomever was lucky enough to receive it. Very lovely card. TFS & Hugs

Love the combination of papers, colors, and texture. This all added to make a lovely card. Thank you for sharing in the Sparkle N Sprinkle February Creative Challenge.