I had great pleasure in making this card for a special friend - I made it shortly after I did my first box card, but could not show I until now as the recipient did not receive it until late in April, by which time I was temporarily not blogging. 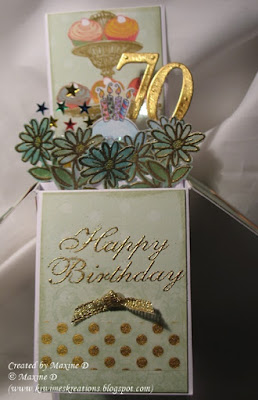 I altered the size from the original dimensions so that it would fit a standard envelope here, so it is a bit smaller than my first one.

My friend loves her garden, so there were flowers on the outside of the closed box, stamped, embossed and coloured, and grounded with lace washi tape. On the front drop down flap I gold embossed the sentiment and added some ribbon and gold washi tape. 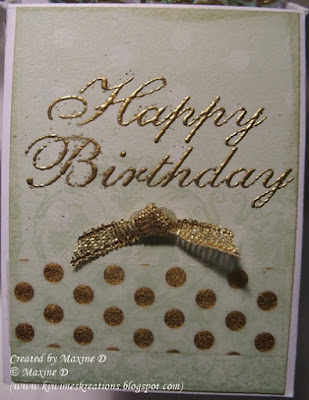 I continued the washi tape right around, but on the side flaps I placed a die cut cat - one in each of the colours that her cats have been/are. 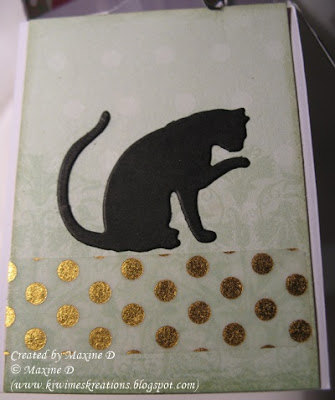 At the front of the box I placed a row of flowers (this stamp is an old Hero Arts one, part of a three stamp set, and one of my original stamps!!)  They were stamped and embossed on a scrap of smooshed card, the leaves over coloured in green, and all covered with layers of WoS. 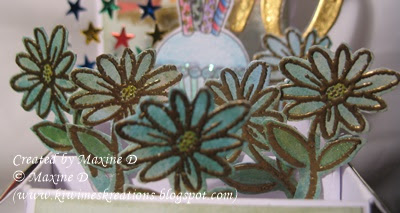 Behind that were the numbers, some stars glued onto acetate, and a cup cake, as my friend is a fantastic cook! 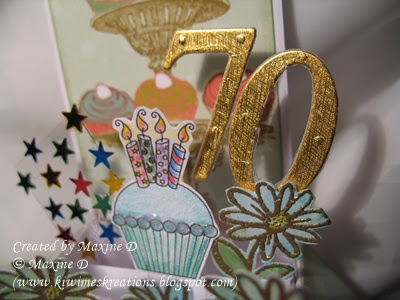 The image of a cake plate on the back flap, was on the dp that I used, and I trimmed it so that I could feature it.  The edges of all the layers of paper were sponged with Bundled Sage DI.

My friend loves her card, and it is still 'on display'.

Thank you for taking the time to visit my blog - may your day be blessed
Any comments you may leave are deeply appreciated.
All comments are moderated and spam deleted.

Posted by kiwimeskreations at 6:52 PM

Wonderful card Maxine, love all the beautiful added goodies, fabulous design. Each time I see one of these box cards I think I should make another but never seem to find the time lately.xx
Have a great Weekend.
[aNNie]

Very pretty Maxine. Love all the elements you managed to get on the box without making it over the top!

Wow!! This is beautifully made! I loved all the pretty elements you used on this card! :)

Super pop-up box card, Maxine. Beautiful design, I sure your friend was thrilled to receive it. xx

How beautiful Maxine! I'm sure she just LOVED it ... especially since you put so much love into it's making! Thanks so much for joining in the fun at our Double D ‘Flowers Galore’ challenge! We hope you’ll come back often.

Elegant, so personal and beautiful this box-card! I have seen many, but they all look to loud and full; this is one of the first I really like! Hope you have a relaxing weekend!

Maxine, I love the depth/beauty of this box card. Gorgeous!!!

So pretty! I bet your friend loved this! Thanks so much for playing along with us at  The Mod Squad Challenge Angie, Challenge Host.

It's amazing Maxine! Ever so pretty and fun! I just know Jan loved receiving this, but know it was hard not to show off sooner. Hugs, Autumn

This is one awesome box card, Maxine! They are a bit labor intensive, but worth making them for somebody special! I am sure you made your friend very happy with this little beauty!

Beautifully done Maxine. I am sure it will be treasured.

A work of art, Maxine! And, truly, a labor of love which I'm sure your friend will treasure always!! Hugs, Darnell

A stunning box card!! Thank you for joining us at Crafty Cardmakers. x

WOW ... what a special card you've made for your friend. So many beautiful elements full of shine. Great job Maxine!! xx

So much thought has gone into making this a truly special card with many personal touches. I expect your friend was delighted with it. Really pretty card Maxine. Anne x

Such a lovely creation! Beautiful embossing details...your friend will love this. Thanks for joining the Double D, "Flowers Galore" Challenge.

So many details, fab box card, thank you for sharing with us at Digi Choosday this week, Julie DT x

Stunning - what a beautiful birthday card. Thanks for joining us at The House that Stamps Built this week.

So beautiful Maxine. Loving all the fun details and gold embossing makes is so very special! I am sure your friend was thrilled to receive such a gorgeous card!

Fabulous box card with so many great details to enjoy, your friend will appreciate this! s glad you joined us at The House That Stamps Built. Donna

What a great card! Your friend will love this as it is so fun/unique AND is so personal to her! Great job!! I've only made one box card like this, but it won't be the only. : ) Thanks for playing with The House That Stamps Built.

Hi Maxine, a great card, love all the carefully selected elements you added to reflect you friends interests, so very personal. Have a wonderful week... Megan

WOW - this lovely and here you go with the details again - love them - you challenge me Maxine to get more adventurous - time is not my friend!! Love this! {{{hugs}}}

Very pretty. I always struggle with this kind of cards. Yours is fabulous. I love the details. Thanks for sharing with us at Inspiration Destination. Good luck!!! Patricia

Oh, how fun!!! Beautiful box! Of course I am in love with the cats!!!! What a wonderful touch!

So Lovely! I'm sure your friend will treasure this!

Your friend had to love this fabulous card! What a good friend you are! Thanks for joining us at The House that Stamps Built!

It's a beautiful box card...Thank you for sharing your card and joining in my challenge at Crafty Cardmakers this time.

Amazing and so unique for your friend. No wonder she still has it on display. Your attention to detail is fabulous on this stunning box x

I'm sure your friend was delighted to receive this beautiful card Maxine particularly as it is so personal. Barbxx

Sensational box, Maxine ~ i don't think Ic ould make one of these if I tried! I think your friend will love this very much ♥

WOW! This is an amazing birthday card!

This is gorgeous Maxine! Love the gold embossing and the 'flower garden'.

This is gorgeous, I just love these cards. Thank you for sharing with us at Crafty Cardmakers Challenge. Marlene DT

Oh how I love this gorgeous card! I love all of the personalization you did on it too- love the special touches like the stars and the flowers. Just fabulous!!!

Oh wow! Fabulous :) Thank you for joining our Anything Goes challenge over at Craft for the Craic.
Best wishes,
Eithne :)

I love this card. I will have to learn how to make this type. What a lovely way to celebrate 70 years.
Thank you so much for joining us in our Floral Profusion Challenge at Crafty Cardmakers!
:) Pam

Beautiful card. I do love this style of card. Thank you for sharing with us at Lemon Shortbread Challenge Blog!

What a beautiful pop up card. I love all the details you have put on it - all finishing touches which makes it look so special.
Hugs, Neet xx