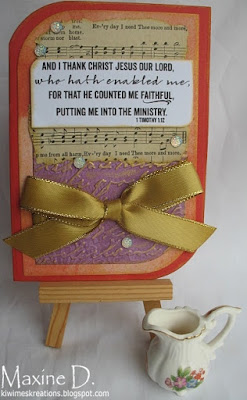 I started by cutting the red base card with the S/B Modern Stationery Die.  The next layer of design paper was cut with the next size down in the same set. 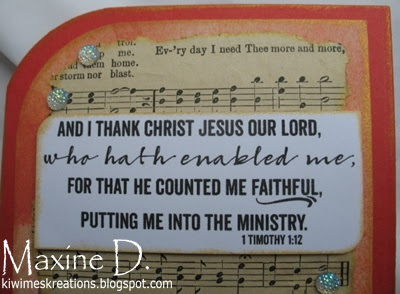 I then tore the sheet music, shaping it roughly along the lines of the die cut, and placed the die cut scripture over it. The purple card (from my 'promise box' - I promise to use you someday - that was an "I don't like it" result of an experiment.), was also die cut, and the edges of all the layers were sponged with
Delicata Golden Glitz ink.

Before assembling the card I placed the (recycled) gold bow across the purple layer . 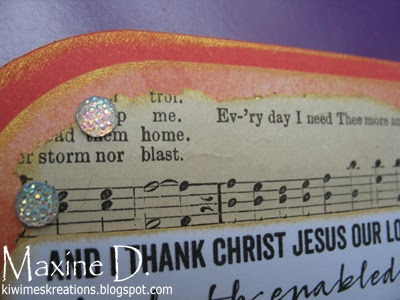 The finishing details were the clear Marianne diamond gems, which are so pretty and reflect the colours around them.

Posted by kiwimeskreations at 8:39 PM

Stunning creation there, Maxine... its a really great verse isn’t it, and you’ve showcased it beautifully ...
I need t have a promise box too, currently it’s a “promise pile” on left of my desk.
You’ve given me an idea, I’ve big box that’s not really utilised well I could go through my promise pile!!! Yay, great idea... mm .... nowwww, adding it to my must do list ... ;-)
Thanks so much for popping over too, sis, and congrats on being a GDT again! Shaz in Oz.x

What a fun shape with the rounded corners. Fabulous card, Maxine!

This is a wonderful card Maxine! I love how you have rounded off the opposite corners, it's such a lovely effect and a unique card shape! Beautiful colours and the bling is so elegant!!

So you had asked about if the landscapers use the raked up leaves for mulch and it got me to wondering, so next time I saw them outside and went and asked. Not a single one of the men out there could tell me what happens to the leaves after they dump them! Kind of makes you wonder, doesn't it?? Hope you're having a great week Maxine, sending hugs :)

Had a chuckle about your 'promise box' x Such an elegant card. Love that memory box die cut for the double base and the mix of colours and elements are fabulous x

lovely card and words thanks for sharing with CLC Rachel DT

A beautiful way to showcase the lovely verse, fabulous how you combined all the elements with the touches of gold and sparkle!

Gorgeous card, Maxine, the unusual shape is really lovely. Love the name of your 'Promise Box'. I've got a box with these sorts of things in too! 'Promise Box' is a much nicer name than my 'Reject Box'! I think I'll have to rename it, then I might actually use some of it. LOL! xx

Thank you for entering your wonderful creation at The Crafter's Cafe this fortnight for our "Shaped Card" challenge.

Well done Maxine. That's great. I like all the little added extras. Those gems are very pretty and the music paper was an inspiration. A very sound text too. Kate x

Lovely Maxine - the Delicata is such a beautiful ink and the hymnal sheet - perfect! Such a wonderful scipture too! xo

Beautiful and I love the shape of the card.
Hugs, Fran

Love the use of music paper here. Thank-you for joining us at the Crafts Galore Encore Anything Goes Challenge.
Good luck

Just beautiful Maxine! I love the rounded edges you used, and fun to use papers from your Promise bin! Love the purple embossed panel with the gold bow.

Wonderful card! Thank you for joining us at Creative Craft Cottage. Cindy (DT)

Pretty card! Thanks for joining us at Creative Craft Cottage!