Wild Roses at Through The Craftroom Door

I am honoured to have the Guest Designer position over at Through The Craftroom Door this week.
Their sponsor is Sheepski Designs, and I chose the Wild Rose image to work with. 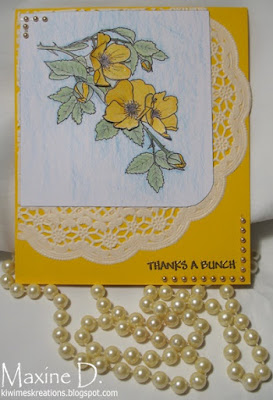 I printed out two copies of the image, and fully coloured one, and partially coloured the other using Faber-Castell Polychromo pencils.  The background on the fully coloured image was lightly  coloured with a blue pencil using the side of the lead, rather than the tip. 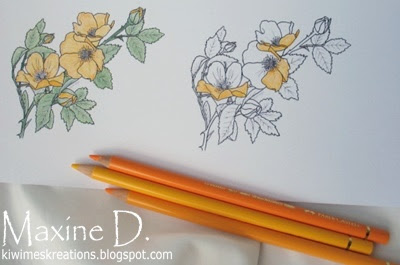 I trimmed out the elements I had coloured on the partially coloured image, shaped them using a ball stylus on a mouse pad, and glued them over the full images, giving just a hint of dimension.

I finished the feature panel by applying several coats of clear Wink of Stella, unfortunately the camera did not pick up the sparkle. 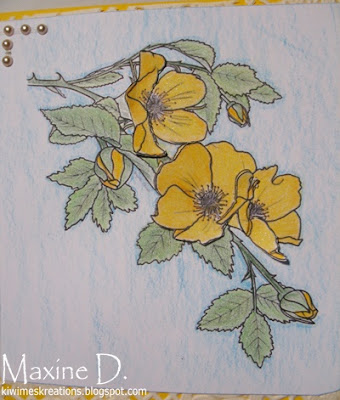 The sentiment, from Kiwistamping, a local (N.Z.) business, was embossed in gold in the bottom right corner of the card base, I then added trimmed down doily (I have had these over 10 years, I think they are meant for a small plate!) and adhered the feature panel over that 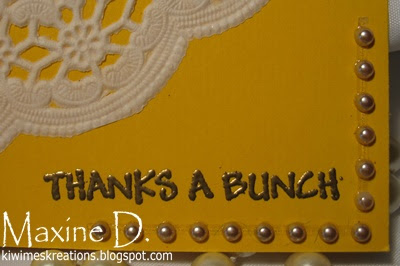 A few Kaisercraft flatback pearls were the finishing touch.

Hopefully I will be able to get around and visit soon - it is so hot here that I am gardening first thing in the mornings, and staying inside the rest of the day!!

Posted by kiwimeskreations at 8:25 PM

Congratulations Maxine on your DT. A very beautiful card.

Beautiful card and love the yellow. Congrats on your GD possy, good on you.xxx[aNNie]🎄

The layers work beautiful and great colouring! Have a good week!

Maxine your card is gorgeous! Love the flowers ... and that doily is awesome too! Congrats on the GDT position!

Beautifully coloured Maxine, thanks for joining us this week at Digi Choosday.
Julie DT x
http://pumpkinbellycards.blogspot.co.uk

Hi Maxine. This is a gorgeous image which you have coloured up beautifully.
I've just got some Wink of Stella and can't wait to try it.
Thank you for entering our challenge at Fashionable Stamping Challenges
Dot x
Ink Art Designs

Beautiful card Maxine, love the pretty layout. Thank you for playing along with our Challenge at The Paper Nest Dolls. We would love to see you again ... Anet DTx

This is lovely, Maxine. The dimension is perfect. Congrats on the GD spot!

Congratulations Maxine on your GD (as you would say) a lovely image and such pretty colour, along with the paoer doily - well done!! xo

Beautiful Maxine! I love that flower image and your colouring is wonderful. The yellow is so bright and cheery! The doily is a lovely element, what a very pretty thank you card! Congrats on your guest designer gig! hugs :)

Biggest congrats on your guest spot and what a beautiful, bright & cheery creation to boot! Love your coloring and this image. Merry Christmas, Autumn

A lovely card, the flower image is so pretty,
Thanks for sharing with us at FSC
Avril

The card is beautiful. Wonderful colored. Thank you for sharing with us at Fashionable Stamping Challenges.
Greetings Carola

Such a beautiful card. I love how you gave it dimension instead of being flat. Congrats on the DT Post over at Through the Craftroom Door.

How beautiful! Your dimensional flowers are lovely. I love the soft blue pencil on the background. I love the pretty doily you added- such a feminine touch! Congrtas on your GDT spot!

Just beautiful.. thank u for sharing it with us at Digi Choosday crafty hugs Julia xx

Congratulations on guest designing and what a beautiful card you've made. Love how you done the colouring, the layout and the slight dimension on those pretty flowers. Don't do too much gardening, take it easy x

Lovely card! Thanks for join us at Crafty Sentiments designs, good luck and hope to see you next time. Hugs Beatriz DT

Loving the elegance of this card, Maxine.

Congrats for being selected as guest designer.

Beautiful card and all the details.
Hugs, Fran

First of all, congratulations on you being Guest Designer. Then to your card. Lovely! I do like how you have made it dimensional and I would not have thought of using just part of the image, what a great idea and so effective.
Whoever gets this card is one lucky person.
Hugs, Neet xx

What a pretty floral card and your colouring is wonderful... makes me think I should use my pencils more but I really get into that comfy Copic rut.
I like how you use embossing powder... it's like an embellishment on its own.

what a beautiful card ! Thank you so much for sharing your work with us at Creates and Makes
WIshing you good luck to win beautiful digistamps !

The dimension you created is so great. The yellow is cheerful and pearls are an elegant touch.

Thank you for joining us at Li'l Patch of Crafty Friends for our challenge.