Welcome
This was going to be the post that I shared my Christmas card on, only I discovered I had not taken a photo of it - oops, thankfully I still have a 'spare' that I can take a photo of.
This card was made as a swap for a wee New Zealand group I am in, and the theme set for December was "three"  Very flexible, the idea being that we use groups of three on the card 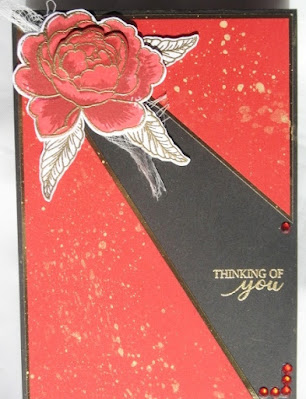 The layered peony had three layers to the stamping, and was coated with Wink of Stella,
and three leaves. 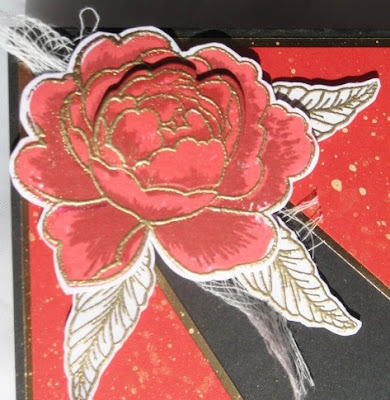 The sentiment had three words 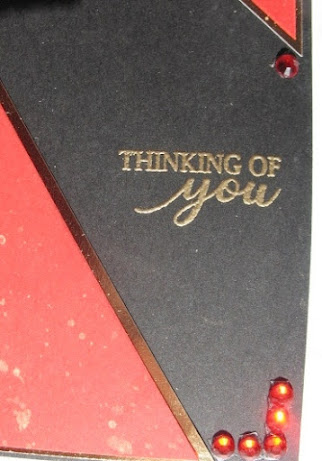 There were six rhinestones (2x3) and there were three panels in the design
There were also three colours - red, gold and black. Posted by kiwimeskreations at 10:23 PM

What a gorgeous layered peony, such lovely rich red. Love all the three's! Thanks for joining us this month at we love stamping xx

What a pretty card you made.
I hope You had a lovely Christmas.
Hugs and Creativity
Cinderella
XX

At Home In New Zealand said...

Looks like you managed to meet the Three condition really well :)
Enjoy your day :) xx

Hi Maxine, a stunning card, love the colours and the splatters you added to the peony. Have a wonderful week... Megan

A beautiful red and gold Rose Maxine and a lovely design as well, many thanks for sharing with us at We Love Stamping December challenge.

OK, so a Peony, my mistake, but still beautiful.

Brilliant workout of threes.
I like this kind of workout.....

Well you certainly hit the theme - 3x3x3... And it has made a lovely card. What a beautiful rose.
Wishing you all the best for 2022. Kate x

A very elegant card, thank you for taking part in the We Love to Create Challenge, Gabrielle Polkadoodles DT

Eye catching and the most beautiful card Maxine x.

A lovely card but what a lot of thought you have put into it so that it embraced "three" in it. I think you deserve a special commendation for the way you have observed three within your card. I am so impressed.
Blessings, Neet xx

Beautiful card!! Thanks for joining us at Lil Patch of Crafty Friends! DT Candace

So very beautifully created. I love the colors and the splatter. Great sketch and love that gorgeous flower.

Simply beautiful card, Maxine. I love your technique with the "threes." Thanks for joining us at International Art & Soul. Maggie, DT

Thanks for joining us at Arty Divas.

Wonderful card! Thank you for your participating in this challenge! Hugs from DT-Irre