Welcome - thank you for visiting. Thankfully life has slowed a wee bit since I last posted - I am not that happy with life moving faster than I can keep up with it.
As part of the Priscillastyles group on Crafters Digital Art Centre, when we reached 300 members Priscilla posted a 'freebie' digital stamp, an image called 'Victorian Rose' - this was for a limited time only.  It is now available at her shop - see the link in my sidebar.
I enjoyed useing this image on this card - initially I had to think through how I would use this, but then decided to go with the sketch from Midnight Madness Challenge #68 - again - this is the third time I have used this sketch for a card - it is one awesome sketch :-)  Thanks again to Priscilla. The fawn coloured panel to the left was embossed using the cuttlebug Oriental Weave folder, the edges sponged with Tim Holtz Tea Stain distress ink, and then some cream ribbon was wound around the card.  The same ribbon was used to create the three wee features on the right of the main panel.
The image was printed twice, and just the rose was cut out from one of them.   The image was coloured with chalks, gold Kindy Glitz added to the berries, and dimensional magic around the lines of the rose flower.  When this was dry,  the  single image was mounted over the base image with several layers of double sided tape - I did not want to raise it too much, just to emphasis the flower.  The finished panel was sponged with some yellow ink, then mounted on fawn card which had also been sponged. 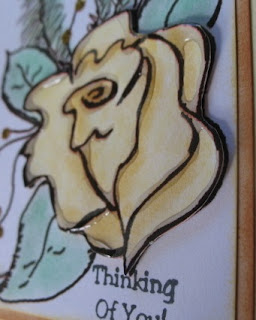 As I wanted to send this card to a friend who is not well, I found one of my very first stamps and stamped it at the base of the flower in black ink to let her know I was 'thinking of her', and pearls added to the corners for an added emphasis.
Overall this was a simple card to make once I decided what I wanted.

Crafts and Me Challenge - Petals and Pearls.


Thank you for visiting, and may your day be blessed.
Posted by kiwimeskreations at 7:39 PM

oh how pretty! Love the rose and your soft colors. The embossing is such a perfect take on the textures challenge at ODBD. Thanks for joining us this week!

Hi this is such a pretty card, I'm your poorly friend will love it!!
Thanks for joining us at CES Challenge.

LOVE this!! So gorgeous!!! That rose is just stunning taking center stage on your card!!! Thanks for joining us at Alphabet Challenge!!

Beautiful detailing on this gorgeous yellow rose!! Such a pretty design!!

Thank you so much for sharing your wonderful work in the Friends of Speedy the Cat's friendship card challenge!!

Wonderful creation! Thanks for playing with Speedy's Friends!

WOW! I love the way you did that ribbon perfect with embossing! Gorgeous card!!

Thanks for joining us at Speedy's Friends.

Hi
what a beautiful card and lovely details, thanks for joining our firsr CES challenge.
Hugs Kaylou xoxo

So elegant and lovely details :)

Thank You for joining in at Crafts & Me challenge x

Hi Maxine this is beautiful that image is gorgeous so is that embossed panel, this is such lovely work.
Hugs
Lorraine x

Hi Maxine!! I just LOVE the border you have created here my dear!! The texture and then wrapping of the ribbon is a cool technique! Thanks for the inspiration!!

Maxine, what a beautiful card...love the way you've added the texture!! Thanks so much for taking the time to play along in this weeks Shining the Light Challenge over at ODBD!! Hugs and blessings, Sabrina

Very pretty, love all the details. Thanks for joining us at Crafts and Me. Hugs Tracy x

This is such a great card I LOVE it :D
Thanks for joining us at CES and crafts and me. Good luck.

Pretty card! Thanks for taking part in the Alphabet Challenge xx

Such a lovely flower...for the Speedy the Cat's Friends challenge!

Beautiful - love the lattice edging on your card- Thank you for playing along in the ODBDSLC! Have a great weekend!

lovely...thanks for playing with Speedy's Friends this week