Warmest greetings to all who call by - I have enjoyed another Sunday afternoon in the studio and have something to show for it, which I will share here.
I have also designed my Christmas Card for this year.  I have had the idea for that simmering for a while, and I want to get them started as I have borrowed a Cuttlebug folder to use on them. 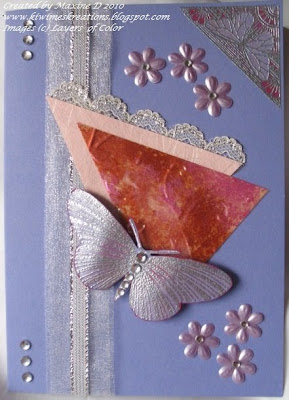 Todays card used the sketch challenge at Midnight Madness as a starting point, and I also wanted to incorporate some acetate embossed in the cuttle bug for another challenge.
I found this sketch quite a challenge - as it is supposed to be - but I got there - eventually, with my own interpretation. 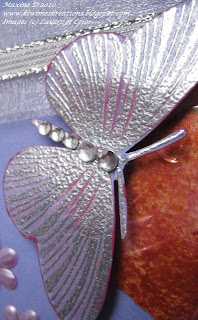 The two ribbons are silver chiffon, - the narrow one has some silver threads in the edges.


I embossed the butterflies from the Layers of Color
Flutterescent Set in silver, and added a wee bit of colour with some twinkling H2O's, which also gave an added  sheen to them.


The 'cut out' butterfly also had some clear rhinestones added to give some dimension to the body. 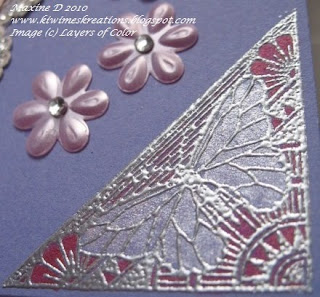 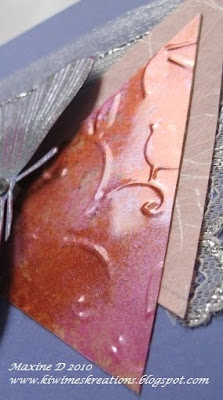 The acetate is some that was painted with Lumiere paints some time ago, it was run  through the Cuttlebug Birdsong folder to give some added dimension, it was backed  with some kraft coloured card before being mounted on the card as part of the sketch.
The card was finished with the addition of some silver edged lace, half a dozen moulded flowers I was given recently, to which clear rhinestones were added to the centres, and further rhinestones were added to the left side of the ribbon to give the card some balance.
This card is being linked to the following challenges.
Midnight Madness Sketch challenge #66
and
CuttleBug Inspiration Challenge # 96
Thanks for calling by, and I do appreciate any comments you leave - they make my day.
May your day be blessed.
Posted by kiwimeskreations at 7:52 PM

Wow Maxine-I love all the sparkle and shine on this beauty. Your attention to detail on this exquisite creation is phenomenal. What a beauty! Great job with the sketch. Thank you so much for playing along with the Midnight Madness Sketch Challenge.

Very pretty! I love the butterfly and corner treatment. Nice take on the sketch this week. Thanks for playing along with us @ Midnight Madness.

This is fantastic! Thanks for playing our Cuttlebug challenge this week!

Maxine, what an embossed BEAUTY this is. Your b/fly is beyond gorgeous and I love your embossed corner image also. Great job!!

Thanks SO MUCH for playing the Midnight Madness Sketch Challenge this week and I hope you can join us again next week!

This is a beauty! Love the butterflys! Lovely colors and it all looks so classy with the silver and the red triangle just stands out - it is very pretty!

Thanks for joining Midnight Madess Challenge. Your support is highly valued, and we hope to see you playing with us again real soon ;o)

Hello maxine - I am not sure why I thought I had already commented on your gorgeous card - maybe it was on SNR....it is just divine ! O love the way you have used the Layers of Color butterfly and the shimmer on everything is fabulous! I love the embossing and the lace too Maxine - this is gorgeous! I am loving this! Thank you for playing along with Midnight Madness Sketch Challenge this week, we value your support and would love to see you again next week! {{{hugs}}}
Linda MMSC Design Team

Beautiful creativity! Thanks for joining us at the Cuttlebug Challenge this week!