Welcome, thank you for calling past today.
I had a brief time in the studio, and I needed a thank you card for a friend and I wanted a 'fishy' theme. 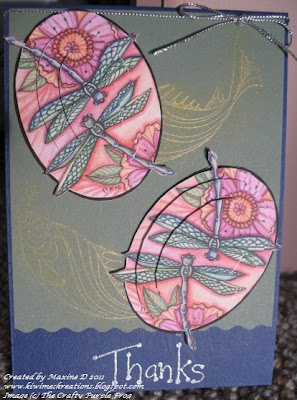 I wanted to use a digital image as my time was limited, and I ended up with these dragonfly images that I won from The Crafty Purple Frog - I was not all that confident using them, but I was happy with the result. 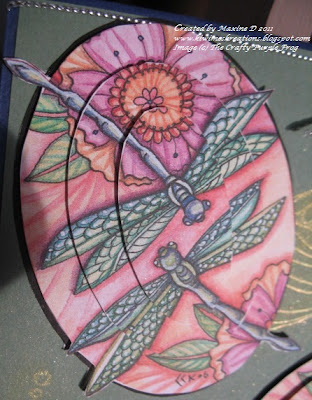 After cutting and layering the images on foam dots, I decided to use a dark blue base card, and then a green over that - I trimmed the bottom of the green with some fancy scissors to mimic waves, and layered it so that the silver embossed sentiment was on the blue. 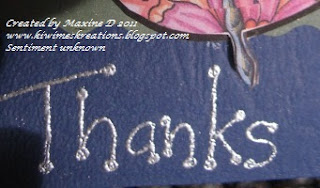 I still wanted a fish image, and decided to use this stamp from Hastings Rubber Stamps,  and simply stamped it twice with versamark ink, decided that the images were not visible enough, so then sprinkled over some yellow pearl-ex, and brushed it off, and I was satisfied :-). 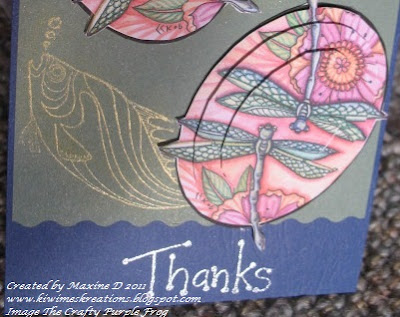 Why the need for a fish image?  When we moved to our home five years ago, there was one fish in the pond, we thought.  We then discovered that there were five fish with the appearance of four baby ones.  Unfortunately over the last few years three of them have fallen foul of the local feline population, so the remaining two have lived in a watery 'Fort Knox'.
Today my friend let me take a couple of her fish to keep my two company - we have named them Pepper and Salt - Pepper because it is so very red, and Salt as there are white markings on the other.
I am linking this to:
Hooked on Crafts Challenge #6 - Things with Wings
Paper Creations Ink- Challenge #7 - Show us your flowers
Paper Playtinme challenge #53 - Anything Goes
Stamps R Us - Anything goes
Stamp With Fun - Challenge #125 - Summer
Stamp Scrapping Challenge Central - Summer
Thanks for visiting, may your day be blessed.
Posted by kiwimeskreations at 8:09 PM

Maxine... Your card is so beautiful! I love the layers and so sorry to hear that you have lost some of your fish! Thank You for joining us Paper Creations Ink! Have a wonderful rest of the week! Happy Creating! Sara

OH my, this is just stunning Maxine. Gorgeous colors and gorgeous image.

Wow Maxine, this is just gorgeous! I love the bright dragonflies, especially with the embossed fish!
Hugs,
Marsha

Wow this is gorgeous. I love the dragonfly's they are so pretty and the colors are WOWZA!!!! I totally loved that layered technique adds so much dimension. Congratulations on winning this awesome image!
Hugs Bonnie

Hi Maxine :D
Thank you for sending me this link this is such a pretty card and the fish look great I hope your real ones will like their new friends and there are no more cat problems.

You did great Mxine. I love dragonflies. They almost look pearlescent. What did you colour them with? I have some Jo Sonja irridescent paints which are absolutely fantastic to get those paua shell tones. I really like the card.......and the story behind it!

Hello Maxine - I am loving your arty card - and hearing the story behind it! Gorgeous details and LOVE the colours - you are really nailing new things Maxine - way to go! God bless you! {{{hugs}}}

What a pretty card. Those dragonflies are just perfect for our Things with Wings challenge. Thanks for sharing with us at Hookedoncraft.

Awesome the way you layered the images! Thanks for joining us at SRU!

Oooh I love this!! So so pretty.
Alicia xx

Wow, the dragonflies and flowers are just beautiful!
Amy

Thanks for Joining us atPaper Creations Ink