Welcome again - this is the last card in a roll - I should be doing some DT work, but I can't get into my studio for various reasons, so I finished this one off at the dining room table, having started it yesterday! 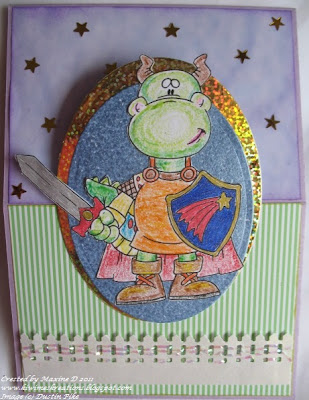 I needed a card for a six year old - I know he loves dinosaurs, but the only dinosaur image I have, I used on his card last year, but he is a lovely young man and will think the dragon is pretty good too. 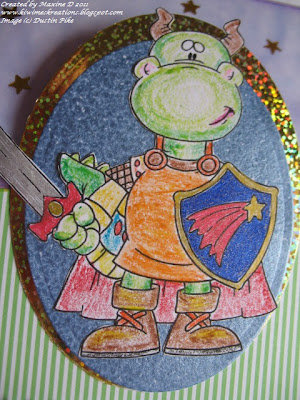 I coloured up this image from Dustin Pike's Doodle Dragon Studio using glitter pens and crayons -  then mounted him on two ovals, which as you can see both have some glimmer and shine to them. 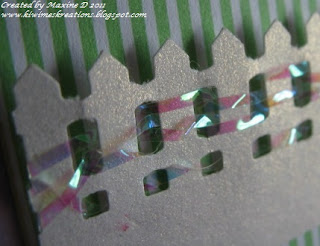 The punched 'picket fence' border is one that I was sent in a RAK from  Lovely Linda, I threaded some plastic strands through it for extra fun. 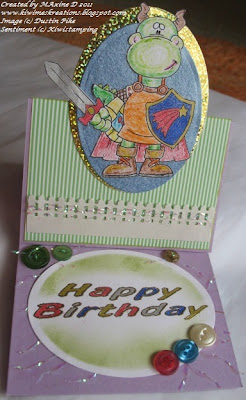 I decided that I wanted a dimensional card, so I made an adapted easel card. 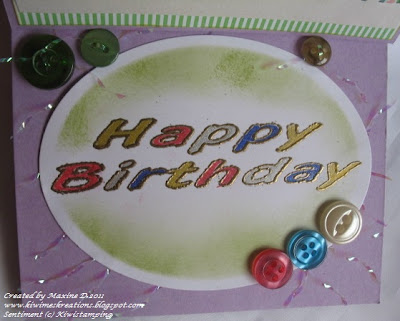 The sentiment is from Kiwistamping - I gold embossed it then coloured the letters with the same glitter pens that I used on the main image, cut it with a Nestie classic oval lg, and sponged it with Memento Bamboo Leaves ink. Placed some lengths of the plastic thread under it, and added the buttons and the card was finished.

Thanks for calling by - may your day be blessed.

Posted by kiwimeskreations at 4:50 PM

This is so adorable! I know he will just love it! Love the fence too.
Alicia xx

How cute is this Maxine - I am sure any six year old will love it! Gorgeous dinosaur and love the easel card! The picket fence looks perfect too! Thank you for sharing Maxine - love it! {{{hugs}}}

Adorable, love the design of your card! Thanks for joining us this week at Catch The Bug.
hugs
Marilyn

Darling- how fun! I love the 'glitz' you added- the gold layer is so fun and love the shimmery weaving through the fence. Any 6 yr old I know would absolutely love this fun card!

Maxine, this is absolutely GORGEOUS! I love your sparkly dragon - what a fantabulous birthday card - you rock!
Hugs,
Marsha

Maxine, hi and I'm so glad I stopped by today to see this card. It looks like you just had fun coloring! This is fabulous and I love what you did to the fence and I just love everything about this card. The buttons are really great how you placed them, their colors and designs. God bless you! PS: Love the swirls on your Feel Good Flowers too.

Oh what a cute card for a little boy! I love how you did an adapted easel and the topper sits above... really cute and the sentiment is colored so cheerily!

Hope all is going well in your corner of the earth!!!
hugs,
Grace

This is so, so cute!! Thanks so much for sharing your work with us over at 365 Cards!!

Very adorable layout! That little fence is just perfect on this card!

Great card thank you for joining us this month. Good luck x

Oh this is too cute!! Just adorable for a six year old!!
Hugs, Shannah xox

Great card, i love the dragon image! Thanks for joining us for the October challenge at Ellephantastic!
hugs
Michelle
Elle DT
xx