I was recently asked by a friend to make a card for her, for a 21st she was attending.
I was given the brief that the recipient liked White, Black and Pink.
This is the result, which elicited a squeal when the recipient opened it, as the colours were identical to her cake!! 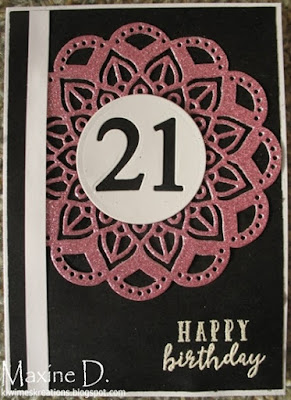 I started with layering the black over the white, then laid another white layer before starting to die cut the doily out of sparkle card.  That took two attempts and a lot of exasperation ... I had already decided to trim the side of the doily and use a black strip down the left side.
I then cut the white centre piece with the numbers cut out, and layered over the black over the doily 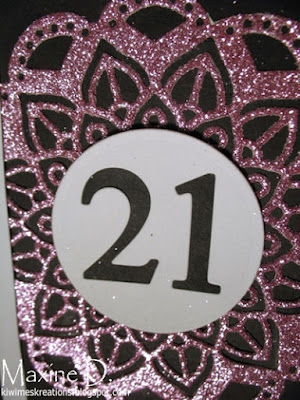 I sent a photo of it to my customer, and she was happy with it all laid out.

Next day I went to stamp the sentiment, and removed the top white layer and was stunned by the drama that was the pink over the black, so made the card up without the last white layer, and changing the side strip ti white. 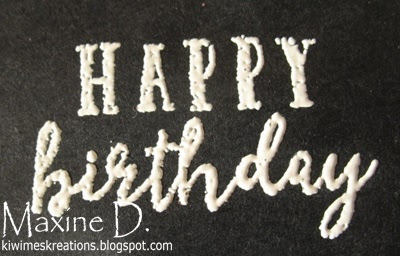 Subsequently I white embossed the sentiment on the black 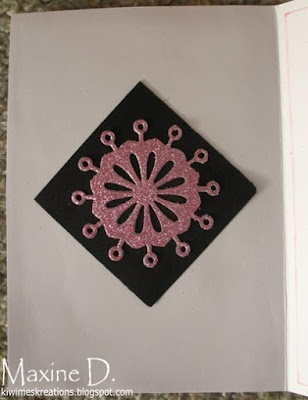 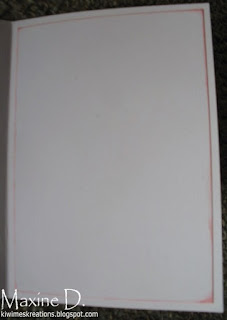 On the right inside I layered another piece of white card that I had sponged the edges of with Worn Lipstick DI ready for the message.

Posted by kiwimeskreations at 8:40 PM

How lovely these colours matched her cake, very clever of you and an amazing beautiful card...xx [aussie aNNie blog]

Stunning Maxine. No wonder the recipient loved it!

Ooh, I just bought that doily the other day! Gorgeous Maxine! Love what you've done with it hun. Thanks for the embossing tips too! LOL about asking how you knew too!! Hugs, Wends xoxo

Maxine, that medallion is stunning - so sparkly and beautiful! Lovely card!

Shiny, bright, and beautiful! Love those colors together and your design. I know she loved his card.
Lynn

Wow - another stunning design Maxine! You never cease to amaze us with your wonderful card designs!
Happy rest of the week for you!
Hugs, Susi

Ohh this is fabulous. Maxine, I love your sparkly doily.

PS: Try to catch up

Beautiful card design, and I love the sparkly paper! So glad you shared this with us at PIP Challenges this week!

Beautiful card Maxine, and the colors are smashing too! Some of these doilies can be frustrating to cut well, and I've found that the metal shim helps tremendously with these fussy intricate dies. Your work certainly paid off because this is lovely. TFS & Hugs

Hi Maxine, sounds like you made the perfect card for the card recipient. I love it when that happens. A very pretty doily die and I often find them difficult. Have a wonderful weekend. .. Megan

Well done you on getting it spot on for the recipient...a squeal of delight is always good x Such a beautiful card and loving the bling x

It's a beautiful designed card and how great that it did match with her cake.
Thank you for joining the challenge at Addicted To Stamps Challengeblog.
Greetings Miranda (dt-ATSC)

Beautiful card with a great design, thanks for playing along at Fab’n’Funky this week.

Lovely card design! Thank you for linking up with Paper Nest Dolls Challenge this month!

Your card is absolutely perfect, Maxine. The sparkling doily is adorable!!!!!!! Kisses, my friend.

This is so posh and stylish, Maxine. I am so happy that it was a perfect match for the cake.

Well done with your card orders Maxine - that is great! Love the pink Sparkle on this - perfect with the black background! I am not surprised at all there were squeals of delight! xo

The colors are perfect. Doilies are something I love to use when I can. This card is spectacular. It will be treasured.

Maxine everything about the card is beautiful. And how nice that the recipient loved it using her favorite colors.
Hugs, Fran

Fabulous card Maxine, very elegant and a perfect entry for our challenge at Fab 'n' Funky, thanks for playing along!
Chris
x

Great project thanks for joining in at Crafting by Designs

So fun and sparkly! Thank you so much for playing along with us in the All Things Bright and Beautiful Challenge over at the Simon Says Stamp Monday Challenge Blog this week :)

Smashing looking card with great design and use of our letters/numbers over at the Paper Shelter. I am running a bit late but I am glad that you decided to join us last week. A new fun challenge is now up and running.
Love n hugs
Marie, dt-leader The Paper Shelter

Fabulous card!! Thank you so very much for sharing your beautiful card with us at Lemon Shortbread Challenge Blog.

Lovely!! Thanks so much for participating in our LEMON SHORTBREAD challenge. Hope you participate in our next challenge!! Have a happy crafty day!!!
Deanne at A Little Bit O’ Paper

This is a very beautiful colour combination on your gorgeous card.
Thanks for joining us at Addicted to Stamps.
Greetings, Danoesja