This past week has been rather busy, and I usually spent Sunday afternoon's in the studio,
After a later than usual lunch with guests, I decided to catch up on blogging instead. 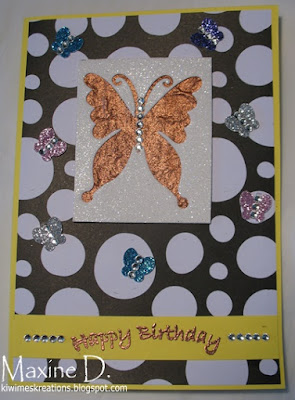 This card was made for a seven year old girl - I had no indications as to her interests etc, so this is the result - lots of glitter and sparkle, over a bold background! 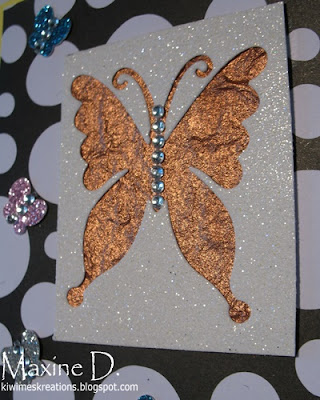 The main butterfly was the negative from a die cut using sparkle card, trimmed into a square, and backed with some bronze textured paper that has been in my stash since, errr,  lets just say years.
Some rhinestones were added to accentuate the body. 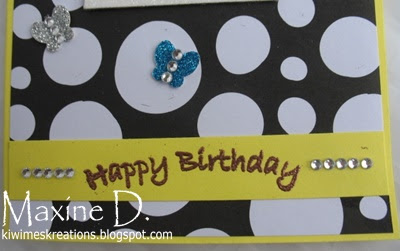 Other snippets of sparkle card were used to punch the small butterflies, and they also received rhinestone bodies.

The sentiment was stamped onto a snippet of canary yellow card and copper embossed, then trimmed before the rhinestones were added to that. 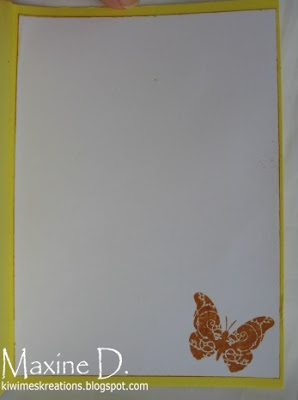 The inside was finished with a butterfly stamp, to continue the theme.

Posted by kiwimeskreations at 3:36 PM

I'm sure the little girl will love the pretty kaleidoscope of Butterflies Maxine.

And what little girl doesn't love a bit (or a lot) of sparkle? I am sure she will love it. It's lovely. Thanks for sharing with us at Digi Choosday this time. Hope to see you again soon.
hugs
Dawn DT
Challenge blog: https://digichoosday.blogspot.com
My blog: https://dawnscraftybits.blogspot.com

This is so beautiful. You know my love for butterflies.

Glittery, pretty and vibrant, what's not to like...She's going to love it x.

Glitter and butterflies, I'd say you nailed it, Maxine! Such a bold card - very fun and love the use of sparkle and bling! Hugs!

Love the butterflies! And that touch of glitter just makes it pop! Thanks for joining our weekly challenge at QKR STampede!

A super card Maxine, a fabulous design - perfect for a youngster.
Pauline - Crafting with Cotnob
x

Perfect for an 8yr old. She will love all the sparkle and glittery goodness. Great card

This is lovely Maxine - I am a big fan of Polka Dots and butterflies - I am sure the recipient loved it -especially with the glitter! xo

Oh Maxine... the sparkle on this card is gorgeous. Lovely job!

A little bit too much glitter for me, but the placing of the butterflies is so super! Hugs, Gerrina

So beautiful, Maxine. Love all the sparkle!
Ellibelle's Corner

Ohh - love all the glitter and sparkle - perfect to highlight this butterfly. Thanks so very much for joining us this time at the Creative Fingers challenge, Elizabeth (DT)

What a very sweet card, this is, Maxine. Sparkly, shiny and lovely.

The butterfly is so pretty and the rhinestones add to the charm.

Such a gorgeous card!
Thanks for sharing your talent with us at QKR Stampede this week!
Good luck,
Crafty hugs
Dawn xx

So very pretty. I love the big glittery butterfly.

Beautiful butterfly
Thanks for joining us at Digi Choosday
Julie T

Butterfly, sparkle and glitter, perfect recipe for a little girl. It reminds me of the episodes on Peppa Pig, when Mrs Gazelle doesn't want the kids to use glitter.. because then the whole world Glitters. This is a beautiful card Maxine, she'd love it.

Great sparkly Birthday card! Love those butterflies and all the pretty sparkly adds. Well done!
Thank you so much for sharing your talent with us at CRAFTY CATZ. Best of luck! Nick

So beautiful. Thank you for play with us at Polkadoodles anything goes challenge, Good luck with your entry.