Aspen and Tennis Anyone

Good morning good folks - the time zones have caught me out again and I am late.....
The first card from the McMahon Five Designs this week is Tennis Anyone? 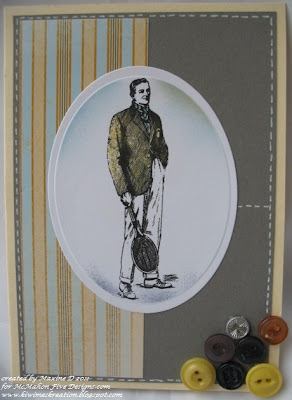 As soon as I saw this image I thought of this paper from the Le Chateau pad of dp by Kaiser Craft.  This sat well on the gray base I had decided to use. 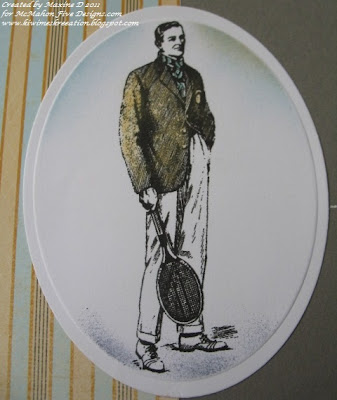 Naturally I left his trousers white, but used chalks to colour his jacket  and a pale blue glitter pen for his tie - a wee smidgen of grey sponged at his feet, and pale blue for the sky and he was 'done'. 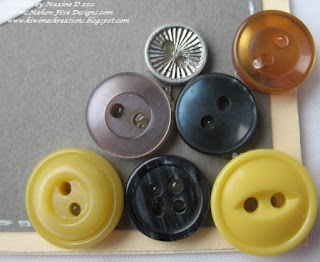 The whole was mounted onto cream card-stock but still looked rather stark, so out came the button jar and on went a corner full of assorted ones, and some doodled lines which make me think of tennis court markings.
So what do you think of this rather suave looking tennis player from
McMahon Vintage collection?
My next image is from Solocosmo Digi Stamps by Jessica Grundy, marketed by McMahon Five Design.
I had one thing planned for days, but just before I went to make it, the idea of sepia tones like on old photograph popped into my head, along with a different layout, and this is what the result is: 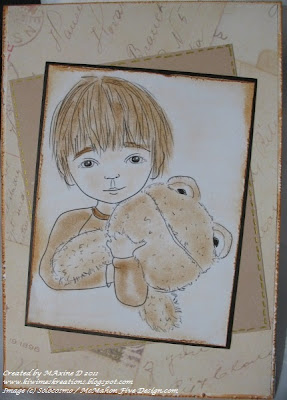 Isn't Aspen just so sweet holding his frog toy?
I used a chalk to colour the main image - just one colour applied in different intensities. This panel was then distressed and sponged with Tea Stain Distress ink and mounted on very dark brown card. 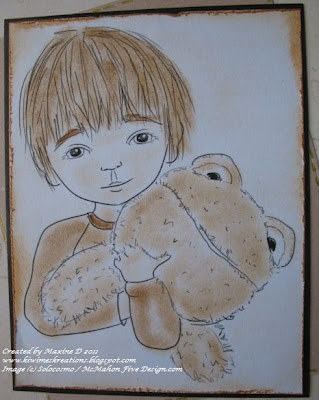 The image panel was then layered over a light brown card which I doodled around the edge of with gold, as my brown pen would not co-operate. 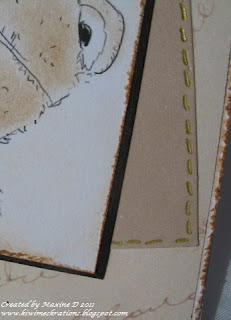 To finish I mounted it all on a white base card stock which was distressed and sponged and layered with some dp from a generic pack I bought years ago.  (Yes I am a bit of a hoarder.)


I am linking these to:
The Paper Shelter Challenge #20 - Anything Goes - both cards
Stampavie and More - #146 - more than three layers - Tennis Card


I do hope you have enjoyed these images - they were fun to work with  and I really appreciate being able to work with these images.  Do  go and look at what the other DT members have done with the other images released this week - their blog links are on the side of my page.
May your day be blessed
Posted by kiwimeskreations at 12:49 PM

Hi Maxine! The masculine card is really lovely!! Very well put together and great design. The second card is so very sweet, love Aspen and his toy ;)

Fabulous cards! I love how you shaded around the tennis image and how you colored Aspen.

Hi Maxine, these are both wonderful. I really love what you did with Aspen. :)

And Aspen is just awesome. I fell in love with that image. I love that you did him in sepia tones. I would have never thought of doing that and it was a perfect choice.

Great cards! The image with the little boy is so cute.

What fabulous buttons...And fabulous card with this handsome Tennis anyone ;)

Fabulous cards great images. Thanks for joining us at The Paper Shelter this week. luv gina xx

Great cards Maxine!! I love how you grouped the buttons together on the first card. Love how you've colored the second image with the Sepia tones

Two fabulous cards Maxine, love that tennis image pwerfect for summer
Thanks for sharing it with us at MAWTT this week and good luck with the challenge
Hugs Laurie xx

wonderful cards - love the vintage tennis player. so summery
Thanks for joining us at MAWTT for my Summer challenge
Lisa x

Great cards- your coloring on Aspen is wonderful and my hubby's favorite image is the tennis image. Have a safe fun weekend!

Cute cards. It really does look like an old photograph. Thank you for playing along with Pals paper Arts

Two fantastic cards!
Thanks for joining in our "Childhood memories" theme at Southern Girls. I have some candy on my blog if you want to pop on over and have a look.
Alicia xx
http://alicia-timetocreate.blogspot.com/

Hi, Great Cards and just right for us on MAWTT this week with our Summer themed challenge, Thanks for playing, Hazelxoxo

lovely creations, Thanks for sharing with us at Charisma this week! Gemma :)

love your tennise card...the buttons were a perfect touch! Your monochromatic card is also very nice! :)

The little boy is such a cute picture...my personal favourite from your recent stash. But I also like the understated, quiet elegance of the gentleman playing tennis.
Amy

Beautiful work! very elegant gentleman and love the boy and his teddy.Thanks for joining us at Southern Girls . Viv xx