I am still in lock down, but for all that I still don't have enough time, and somehow the last ten days have flown - the gardens are looking good though, and ready for winter.
I have also got both embroidery and knitting projects underway..
Oh, and a major operation in the bathroom thanks to a leak from under the shower that has only just shown up... 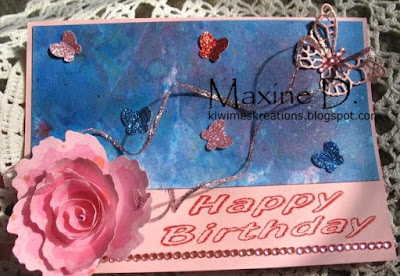 I made this card for my granddaughter who has just turned ten, and she loved it. 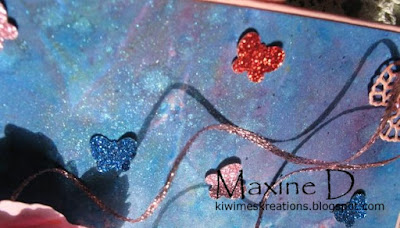 I started with this off cut from a piece of watercolour paper that had I used Brushos and cling wrap on, and then sprayed with Lindy's Blue Hawaiian Blue.  I also added some butterflies punched from glitter card in pink, blue and red. 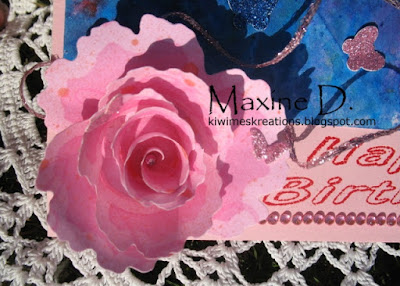 As I knew this would be hand delivered, I made this large flower from a S.B die, sponged the paper with ink while still in the die, and then sprayed with another Lindy's spray, but it doesn't really show up, before forming the flower.  If you look closely you can spot that I added two wee glittery butterfly die cuts and a rhinestone in the middle. 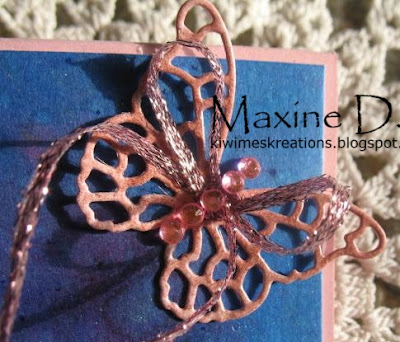 This butterfly was in my jar of pre-cut butterflies, it is a M.B die now discontinued, and I have no idea what I used to get the sheen on it!  I tied a bow of shiny thread and glued it on, but it looked a bit messy, so hid that with the rhinestones, which also gave it extra security.
The tails of the bow, which curled as they had come off the spool,  I tucked under the edges of the blue panel and secured them there. I also added a wee dot of glue under them where they touched the panel, just to keep them in place.

This sentiment stamp is one of my first, and this time I simply stamped and embossed it in a 'rich red' powder - the wee jar is unbranded and has been around almost as long as the stamp!
To add to the glamour I put a string of rhinestones across the bottom of the greeting. 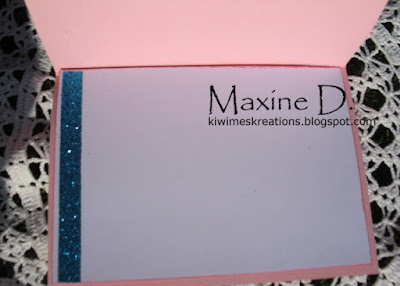 The inside was very simply finished with a strip of sparkle tape.

Posted by kiwimeskreations at 9:22 PM

I like the contrasting blue and pink! And an elegant card!
Hope that the leque will be solved soon! Enjoy the warm beautiful days as they come! And enjoy the weekend!

Maxine, your card is so pretty - glitzy, girly, and gorgeous!

It's a very pretty and feminine card Maxine and I am not surprised your Granddaughter loved it.

Always seems strange when I read blogs from the other side of the World and they are preparing for the opposite seasons, but you sound well ready with your projects.

Such a girly and beautiful card and obviously made with love x.

This is so pretty Maxine, I am sure your granddaughter loved it!

Maxine: Greetings to my online crafting friend! Hey, I'm around the world from you and we've had a sewer line issue causing gurgling periodically in our half bath toilet! After a check by the town water/sewer dept. on one side of our property, a local plumber found it on the other street of our corner property. Turns out that the 75 feet towards the street is considered our problem! Might be a $500-1K issue to get fixed!!!! The crew's suppose to fix on Monday or Tuesday. Jeepers! But in the midst of your craziness, you made a stunningly charming birthday card for your granddaughter! I'm sure she loved all the glitter and sparkle! I love the artistic swirls of color movement in your background! Fantastic creation!

Very pretty card for your granddaughter Maxine. No wonder she loved it, it's beautiful. Stay safe.

A beautiful card Maxine, a lovely handmade flower and pretty colours - it sounds like you are keeping busy.
Pauline - Crafting with Cotnob
x

This card is so rich and elegant with all the little glam additions! I’m sorry about your shower leak. I also have one nonfunctional bathroom due to a leak right now 🤦🏻‍♀️

Thanks for getting floral with us at MAWTT,

Beautiful card! I'm sure your granddaughter loved it. Believe it or not, It's been months since I've made a card. My longest stretch ever going without crafting much of anything. I just lost some of my emthusiasm (sure hope it comes back soon) I need to make a card for my granddaughter's birthday it's net week. I did get to see her briefly though my glass door on my birthday. Sure wish I could have hugged her.
Even with all our house repairs that we need to do, I am so grateful to have a roof over my head. I will never take that forgranted.

Such a sweet pink card, Maxine. I am sure your granddaughter will love it. The butterfly with the ribbon on is the sweetest. Lovely rose too.

I am sorry that you have issues with the bathroom can get resolved soon.

MB Pippi butterfly think is my most used butterfly die, it actually has wear marks on pookey tool spots! Great card Maxine, really love your card.. I'm moving out of lockdown here, thankfully. Actually visited fanily Sat. A nursing home on Fri and today had a visitor.. and Wed is my sister's birthday so all three of us will be together.. as baby sister will come over too. Two adults can visit a household (with chn, too).
Looks like Jacinda and our Scott are going to open up our borders between NZ and Oz.. in tomorrow's meeting time will tell. As long as people be sensible.
Sorry for late visit! 😊
Thanks for sharing, and may God bless and keep you and all whom you love, in these changeable times. As Paul wrote: "We walk by faith, not by sight."
Prayer hugs, Shaz in Oz. X

Wonderful, and I like flowers and butterflies. Thank you for playing our challenge at Krafty Chicks, so like this card, very nicely done.
Leanne DT/KC

This fabulous card is perfect for your granddaughter, Maxine. Of course she loved it. You use great embellishment and I am in love with this BIG rose! Hugs, my dear friend.

Such a special card for your granddaughter, Maxine. No wonder she loved it!!! It's such pretty colours, had a gorgeous dimensional flower and lots of glittery butterflies. A lovely keepsake for her. xx

Thank you for joining us at Creative Fingers

Fantastic project! Thanks for sharing it with us at Digi Choosday good luck and hope to see you again!