In the small New Zealand swap group I am part of, this months challenge was to use the ATC we had received in a previous round,  on a card.  Either as a 2-D box,  the 'lid' to be cut from the ATC, with something coming out of it, or make a card with it as the focal point, but you were to use your 'bitz' on the card - nothing specifically made for it. 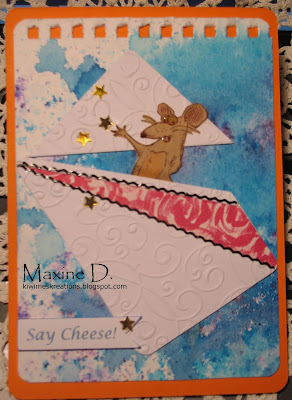 Because of the recessed panel on my ATC, I decided to cut the lid on an angle following the recess.
The background I chose was a piece from a mixed media notebook that I had torn out and played with brushos on,  leaving the torn edge for extra interest. 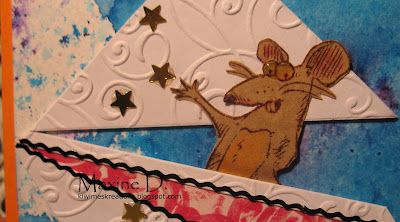 I stamped one of the rats from the KatzelKraft set Les Rats des Villes on kraft paper and lightly coloured some areas with Prismacolor pencils, and added glossy accents to it's eyes, nose and teeth.
I then carefully placed it so it looked as though he was popping up from within the box and throwing stars around. 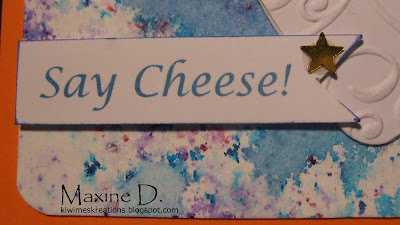 The sentiment was computer generated, and then trimmed to a banner shape, and mounted using foam dots.  For extra interest the corners were all rounded to match the ATC. 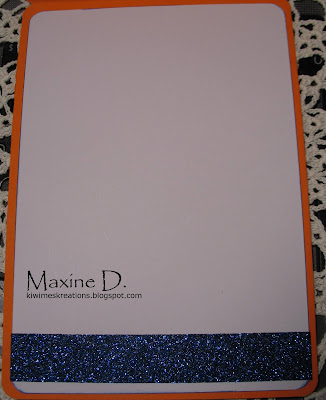 The inside was decorated with some dark blue sparkly scotch tape.
The recipient enjoyed the card :)

Posted by kiwimeskreations at 7:42 PM

Lovely blues there and I like what you did here. Everything looks so lovely. The glossy accents must have added such a real look to the eyes, nose and mouth of this very funny image. The blues on the image are just too beautiful.

The sentiment is perfect. I remember how we used to 'say cheese' before getting a photo clicked and the children of today 'say pizza'. Lol.

Isn't this just such fun Maxine and I love the colour combo of oranges and blues, works so well.

Oh goodness cheesie smiles, you sure had fun here my friend and absolutely love it... great everything, especially those colours.
Don't forget to enter into the Ink Art Challenges...xxx

This is fabulous Maxine, a great background and fun design.
Pauline - Crafting with Cotnob
x

WOW! That was certainly a creative challenge - and you mastered it, Maxine! Your card is adorable!

Super cute with that fun rat Maxine! Love the way it looks like he's coming up out of the paper.
Lynn

Oops, forgot to thank you for joining us at 2 Crafty Critter Crazies Maxine!
Lynn

How cute and clever!

What a delightful card Maxine. This was quite the challenge for sure. Love your idea.

I think it is always fun to have a play with words and sayings...and to do that with such a great design; so clever! Love the colours! Hugs, Gerrina

What a fun and fabulous little creation and I so love how you've designed it x.

This is a super card, Maxine. Great use of the ATC on your beautiful design. Kisses, my friend.

Haha haaaa! This is one fun card Maxine... you certainly thought outside the box 😁 sorry really bad pun! 😉
Clever and imaginative additions to design too!
😊 love it! So grateful to have your friendship through all things..
Thanks for sharing, and may God bless and keep you and all whom you love safe and well.
Prayer hugs, Shaz in Oz. X 7

That is so cute and what a clever way of using the rat. Well thought out for the challenge.
Blessings, Neet xx

Hi Maxine. I love what you did with this - a triumph! The mouse is so cheeky and the whole thing is fun. CarolG

This is adorable, Maxine! So very creative challenging to take the ATC and use it in a different way! The background 'practice' paper makes an artsy backing for the ATC and those added bits! FAB card! For APTS blog DT group, my commenting # is 8 but when I saw your name I wanted to take an extra moment to give you some blog love. Thanks for linking to APTS blog!--Becca

What a great idea! Super cute Maxine ~ Thank you for joining us at Jan's Digi Stamps. Pam, DT

How fun. Love this little mouse and the overall scene you have created. Thanks for playing with us this month at A Place To Start Challenge. AJ DT APTSC

Great rat! Too cute. Don't the Brusho's leave behind such great stuff to be used later.This one makes a fabulous background. Thanks for sharing your gorgeous creation with us at PIP challenges.

Such a great idea for a swap! Love what you did with your ATC and adding the furry addition! Thank you for sharing with us at The Path of Positivity.
Carole DT x

Cute design, Maxine! Thanks so much for your fun and creative submission to our challenge at A Place To Start!
Hugz,
Chana Malkah, Owner

I apologize for the tardiness of this comment. Life caught up with me!

What a lovely card!!

Thank you for playing along with us at Lil' Patch of Crafty Friends, and please accept my sincere apologies that I am late checking out your wonderful project.