Welcome
This card is version three for my friend - the first one I made smudged just as I was doing the final assembly - the top layer was binned and the base re-used for another card.
Version two was just too 'busy' and almost gaudy and I didn't like it, and didn't think the recipient would either.
So welcome to version three! 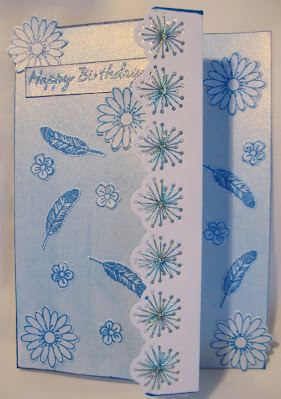 The 'fold; is one I learnt from a video by Natasha Foote, here.
I started by painting the front, and a portion of the inside, with
Cosmic Shimmer Opal Polish Summer Sky 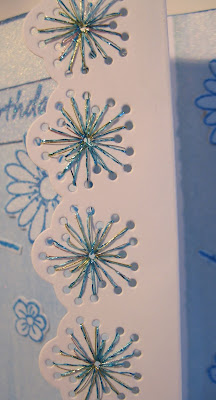 The folded part of the front panel I die cut with the Spellbinders border from the large "Die of the Month Club " from May this year, (a NBUS set) and stitched it with two threads - a glitter blue thread and an iridescent metallic machine thread. 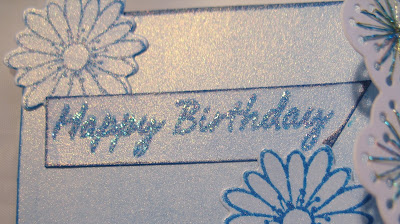 The greeting was stamped with a layer of Versamark and then the blue ink, and then embossed with some iridescent embossing powder. 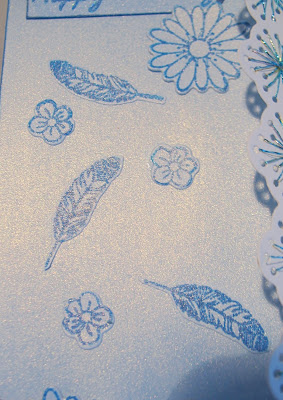 I had thought to emboss the rest of the panel, but it was not possible.  I painted another scrap of paper, then stamped the accent images on it with Catherine Pooler Something Borrowed ink, and die cut out the images - all magazine freebies
All the card edges were run over the same embossing pad to give a subtle but definite edge to the card. 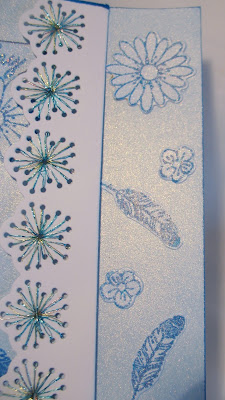 Posted by kiwimeskreations at 10:06 PM

What fun! Love the stitching on this lovely card, Maxine! You are so creative!

Your feathers and flowers make a wonderful shimmery card for your friend, Maxine! The fold is amazing and the care and love you put into the design is obvious. Good for you to persevering! And thank you for sharing with everyone at NBUS! Hugs, Darnell

Maxine this card is stunning and I am so glad you persevered x. Fabulous fold design and the stitching looks amazing. A real stand out card x. So Sorry your friend was flooded in July x.

A very pretty card Maxine, and I love the stitching detail. It reminds me that I haven't stitched on cards for so long, and I used to do a lot!

This is a great card. The design and color is perfect. Wonderful!

Pretty indeed - love all the shimmer

Beautiful card and love the fold. The blue gives me a bit of peace..xxx

Beautifully done. I have only recently found Natasha's videos. She's great with the added bonus of being a NZer!

A lovely shimmer and such a pretty shade of soft blue Maxine.

Thank you for playing along this week at International Art & Soul. I sure hope to see you back again very soon!!!

Beautiful card! Thanks for sharinf the link. I also like that stitching. It's something I like to too on cards...but it's been a while. Youm may have inspired me to try again.

Very pretty Maxine. I love how you made that little fold on the side. Hugs, Maggie

Such a well thought out and executed card for your friend. How lovely for it to be based on happy memories you two shared. Love the shimmer.
So sorry it took three goes before you reached the one you felt happy with but the end result is well worth it all.
Musst check out this fold.
Blessings, Neet xx

Ohhh, I love the soft blue, the glimmery sentiment and the beautiful stitching on this card! Wonderfully done!

This is beautiful! Thank you so much for playing along at Make My Monday Challenge blog.

A beautiful card Maxine, with lovely colours and the fold. That die edge is amazing. CarolG

Such a delightful card - definitely third time lucky. I love the flowers on the folded part very much. Blue used like this always works and this is such a pretty card.
Must check out the video of the fold.
Blessings Neet xx